You are here: Home / About Linlithgow 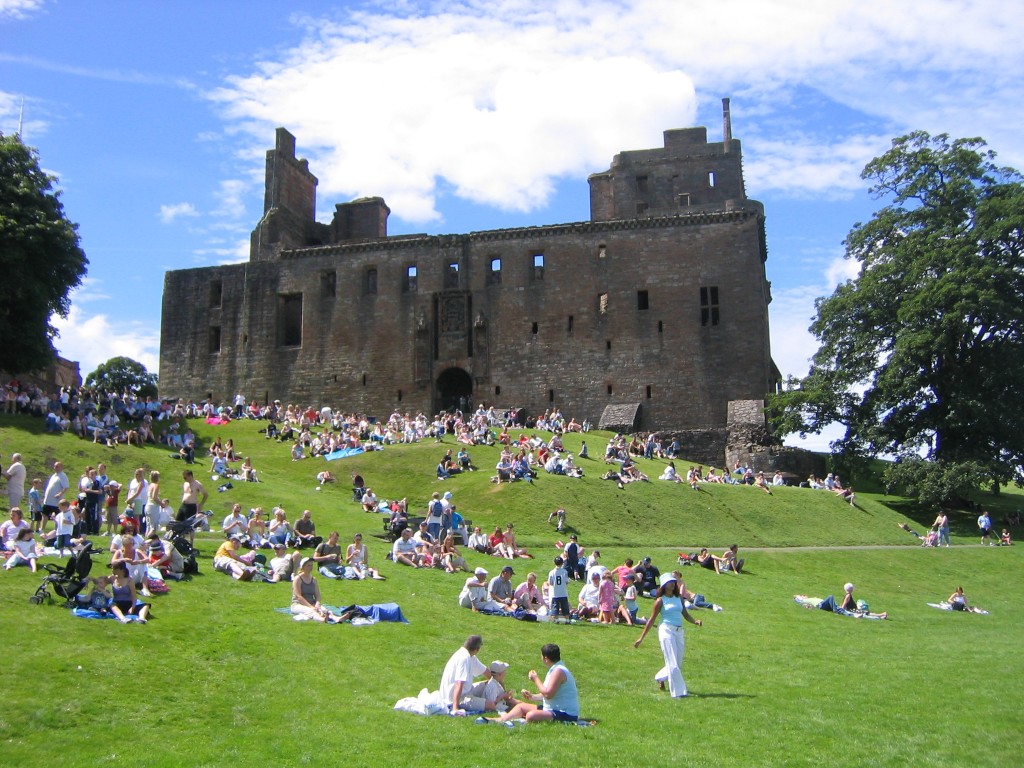 Linlithgow (pronounced /lɪnˈlɪθɡoʊ/) (Scottish Gaelic: Gleann Iucha, Scots Lithgae) is a Royal Burgh in West Lothian, Scotland. An ancient town, it lies south of its two most prominent landmarks: Linlithgow Palace and Linlithgow Loch, and north of the Union Canal.

The town’s coat of arms shows a black dog, chained to an oak tree, which grows on an island. Linlithgow’s patron saint is Saint Michael and its motto is St. Michael is kinde to straingers.

Formerly the princpal town of West Lothian, which was also known as Linithgowshire, the town lies some 20 miles (32 km) west of Edinburgh along the man railway route to Glasgow. Before the construction of the M8 & M9 motorways and the opening of the Forth Road Bridge, the town lay on the main road from Edinburgh to Stirling, Perth and Inverness while the canal system linked the burgh to Edinburgh and Glasgow. The nearby village of Blackness once served as the burgh’s port.

The chief historic attraction of Linlithgow is the remains of Linlithgow Palace, the birthplace of James V and Mary, Queen of Scots, and probably Scotland’s finest surviving late medieval secular building. The present Palace was started (on an older site) in 1424 by James I of Scotland. It was burnt in 1746, and, whilst unroofed, it is still largely complete in terms of its apartments (though very few of the original furnishings survived).

Linlithgow was also the site of the Battle of Linlithgow Bridge at the western edge of the town. The bridge no longer stands today. The roadway to Linlithgow over the River Avon is described by scholars as a lifted road.

Apart from the Palace, a second attraction, standing adjacent, is 15th century St. Michael’s Church, the most complete surviving example of a large late medieval ‘burgh kirk’ in Scotland. Its western tower originally had a distinctive stone crown spire, of the type seen also on St Giles Cathedral in Edinburgh, orNewcastle Cathedral, which was removed in the early 19th century. In 1964 a replacement, and at the time controversial, spire in aluminium in a modern style by the prominent Scots architect Sir Basil Spence, representing Christ’s crown of thorns, was added.

Many historic buildings line the High Street. On the south side ground levels rise and several historic “wynds” and “closes” as found in Edinburgh still exist. The most prominent space is on axis with the road to the Palace. This contains the Cross Well of 1807 which proclaims itself to be a replica of its 1628 predecessor. To its north stands the Town House of 1668 by the master mason John Smith. This replaced a previous hall demolished by Oliver Cromwell’s army in 1650. Much of its original interior was removed in a modernisation project of 1962.  The High Street is particularly noted for its high number of ancient taverns.

James Hamilton of Bothwellhaugh carried out the first assassination with a firearm, when he shot James Stewart, 1st Earl of Moray, the Regent of Scotland, on 11 January 1570 in Linlithgow.

The town’s coat of arms features a black bitch dog against an oak tree, after a legend of a black greyhound whose master was sentenced to starve to death on an island in Linlithgow loch. She used to swim from the town every day with food for him, and managed to save his life. The townspeople took the symbol of the dog’s loyalty and bravery as their own. The local pub named “The Black Bitch” is one of Scotland’s oldest pubs.

Linlithgow’s rich history and central location make it a popular tourist destination, while a significant proportion of the local population make the daily commute to Glasgow, Edinburgh or Stirling, made relatively easy by the town’s railway station and proximity to both the M8 & M9 motorways.

The town is served by three supermarkets and a retail park situated in Linlithgow Bridge hosting a Homebase and an Argos Extra among its five units. However, the town continues to support a diverse range of local retailers in the High Street. There are controversial proposals for a new retail development to the east of the town. These are being opposed by a local lobby group.

A number of local parks, including play areas for children, are spread throughout the burgh, with the tract of land surrounding the palace known as The Peel being particularly popular in summer. Low Port Outdoor Education Centre is situated next to the loch and provides facilities for many outdoor activities, many based on the adjacent loch. Nearby country parks include Beecraigs and Muiravonside.

Donaldson’s College – Scotland’s national school for the deaf – relocated from Edinburgh to a new building in Linlithgow in 2008.

The Riding of the Marches, held in one form or another since the mid-16th century and nowadays celebrated on the first Tuesday after the second Thursday in June, involve young and old in the tradition of checking the burgh’s perimeter, including the town’s historic port of Blackness. Although today’s activities are centered more on the colourful parades through the town that involve bands and floats decorated by local groups, the more ceremonial duties of the Marches are still adhered to and a variety of local groups ensure that the traditions, old and new, are maintained.

There are many other events during the year such as the Children’s Gala Day, the Linlithgow Folk Festival and a pre-Christmas Victorian Street Fayre, and the sense of community is enhanced by many active local groups such as Linlithgow Amateur Musical Productions (LAMP) , Lithca Lore, The Linlithgow Players and The 41 Club. The town also has its own weekly local newspaper, the Linlithgow Gazette.

The town has two Church of Scotland parish churches – St Michael’s and the smaller St. Ninian’s Craigmailen. There are also churches of other denominations, including a Methodist chapel (now an evangelical church, St. Johns, which meets in Linlithgow Academy on a Sunday morning), an architecturally distinctive Scottish Episcopal church, and a Roman Catholic church, also called St Michael’s, which was used as an ambulance depot by Polish servicemen during the second world war.

(The above text is taken from Linlithgow Wikipedia page http://en.wikipedia.org/wiki/Linlithgow)